From the Camp Clipboard: Finding Courage at Camp Through Parshat Pinchas 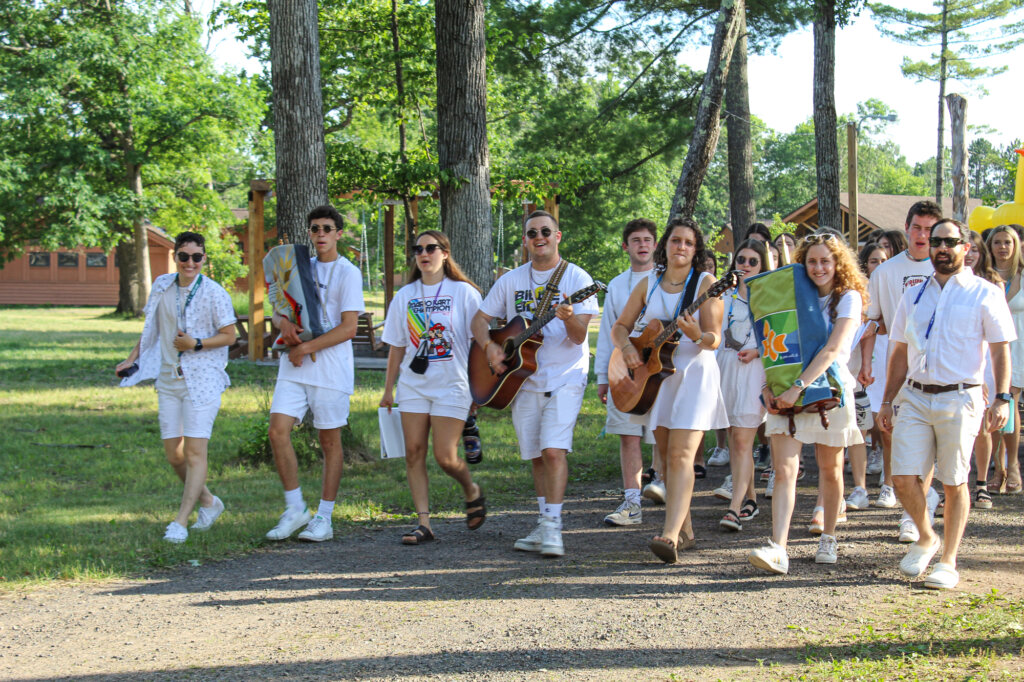 Here we are on our final Shabbat of session Aleph in 2021. We’ve had an amazing session filled with wall climbing and canoe trips, cookouts and Bikkurim. We’ve gathered all together for meals in our brand new outdoor eating space, and even created and sung an awesome new cheer for the p-a-v-i bachutz bachutz bachutz every time we do. We have learned about three middot (attributes): courage, gratitude and community mindedness. What a session it has been, and we still have a few more days filled with fun and ruach (spirit).

This week’s parsha is Parshat Pinchas. In Pinchas, we read about a man named Zelophehad who “died in the wilderness and has left no sons.” Zelophehad may not have had sons, but he had five daughters; Mahlah, Noah, Hoglah, Milcah and Tirzah. Zelophehad’s daughters (Bnot Zelophehad בנות צלפחד) were aware of the law that only sons could inherit their father’s property. The daughters faced an unjust situation, and reacted with the courage to seek change.

Together, they came to Moses saying, “Let our father’s name not be lost to his people just because he had no son! Give us an inheritance among our father’s tribe!” While Zelophehad’s daughters reacted in a courageous and inspiring way, Moses responded in an equally courageous manner. As Winston Churchill is erroneously quoted as saying, “Courage is what it takes to stand up and speak, courage is also what it takes to sit down and listen.” B’not Zelophehad had the courage to stand up and speak, Moses had the courage to sit down and listen.

The very next thing the Torah tells us after Zelopehad’s daughters come to him is “Moses brought their case before God.” Moses, the rabbi of the rabbis, the man who brought the Torah to the Jewish people, didn’t know the answer. He went to someone who would. In Midrash Tanchuma, a commentary on Parshat Pinchas, we read, “Some say that God made this become too hard for Moses, as there are righteous people that become overly proud in matters of a commandment, so the Holy One, blessed be God, weakens their ability. According to this midrash, God intentionally set up a situation for B’not Tzelophead to come to Moses with a difficult situation, so that Moses would have to model what it looks like to have the courage to sit down and listen, the courage to ask when one doesn’t know.

Camp is a place that requires courage. Whether it is the courage to do the “Jump of the Jews” on our new high ropes course, the courage to walk up to a stranger and ask them to become a new friend, or the courage to get up in front of the Yabonim talent show to sing in front of everyone, the type of courage that Bnot Tzelophead display can be seen every day at camp. The second type of courage, the courage to sit down and listen occurs every day as well. Whether it is campers listening to a new opinion in their Shabbat sichot they may not agree with, or asking a more experienced camper about a tradition they are not familiar with. Courage, both forms of it, is a middah that is everywhere at machenh (camp).