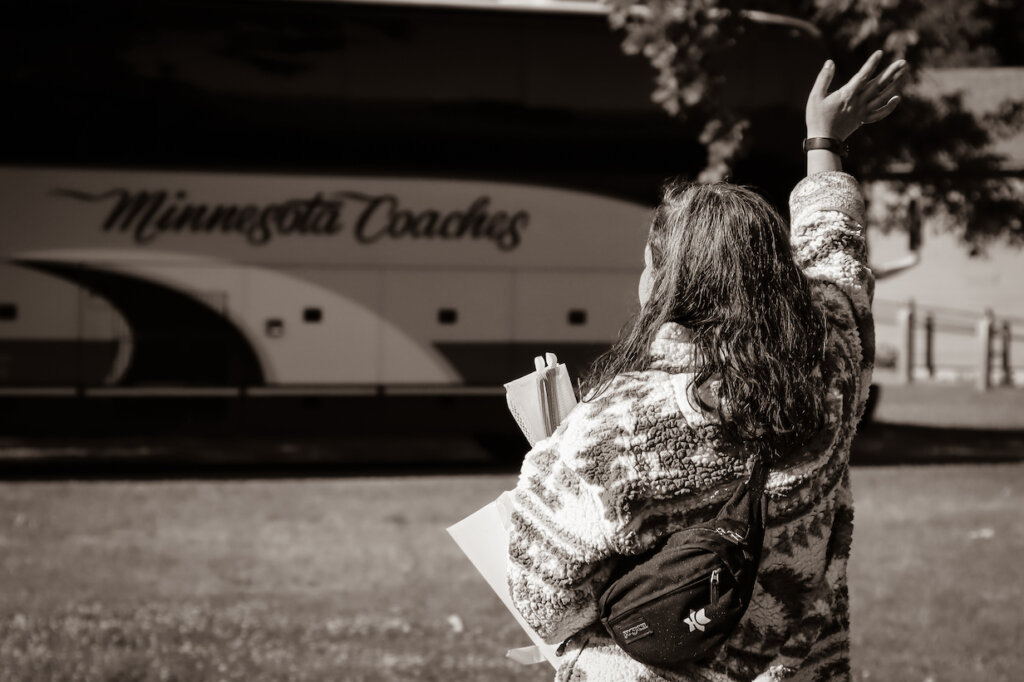 When the buses rolled out of camp on the last day, I closed a chapter, really many chapters, of my life. After 27 summers at Herzl Camp, I am stepping out of my professional role and into a new role: that of friend and alum of this magical place where so much of who I am was formed.

In 1994, when I stepped off that bus and into the Ulam as a first-time camper called Andi, I could have never imagined that I would return to Herzl Camp for 27 of the next 28 summers as a child, teen, college student, young professional, wife and mother with the nickname Drea. In those years, it has been my great privilege to help thousands of campers and staff find their best selves on the shores of Devils Lake.

Every moment at camp is filled with the power and the potential to change lives—lifelong friendships are made, spiritual and career callings are heard and answered, children and young adults discover their authentic selves and bring that knowledge back to their families and community. Summer after summer, together with passionate, talented staff and dedicated volunteers, I did my best to harness the power of this life changing experience and deepen its impact.

Caring for your children and returning them home safely to you—dirty, smelly, and perhaps with a little “camp crud”, but hopefully more confident in themselves—has been the focus of my life. While I didn’t always get it right, I was guided by my dedication to the camp community and always worked to make camp a little better, a little safer, a little more magical everyday.

Todah Rabah/Thank you to all the families who entrusted camp and me with their precious children and made us part of your village.

Todah Rabah to the campers who have always shown up at camp with their whole selves.

Todah Rabah to the staff who put camp’s mission first through all kinds of challenges, even, and maybe especially, when we didn’t agree.

Todah Rabah to the Burnett County community who welcomes camp in every summer, cares for camp, and keeps camp safe.

Todah Rabah to the volunteers and donors whose generosity with their time, talent and treasure provides the foundation for camp’s magic year after year.

Together, we created a k’hillah kedosha—a holy community—on the shores of Devils Lake each summer.

At the end of summer each year, as the buses roll out, I have celebrated the true magic of this place—the moment when our campers and staff take what they’ve learned and bring camp’s magic out into the world. Now, twenty-seven years later, it is my turn to take what I’ve learned at camp out into the world, knowing that camp will always be with me.

When I see my child learn a new skill, I will hear the ringing of the bell at the top of the rock wall – the sound of accomplishment in action.

In peaceful moments, I will think of the quiet that settles over camp as we bless the children at the flag circle on Shabbat.

When I laugh until I am gasping for breath and tears are streaming down my face, I will be transported to the late night silliness and joy of camp with my friends and later with my colleagues.

When I experience the thrill of a new beginning, I will crave spaghetti.

When I experience something new altogether, Debbie Friedman’s (z’l) Shehechiyanu will play in my head and soothe my soul.

In moments where I feel a deep sense of belonging, I will hear the crackle and smell the scent of a bonfire and be brought back to Ner Howie, swaying arm in arm and singing with my camp community.

It has been an honor to serve as Herzl’s camp director. Now it is my honor to join you as one of Herzl’s many supporters, friends, and alumni forever changed by this magical place and forever grateful for my time on the shores of Devils Lake.

With love and ruach always,

I have known Drea for over a decade—since before she became Herzl’s Camp Director. Like many in the Jewish camp field, I’ve benefited from Drea’s creativity, analytical mind, joyful spirit, and abiding friendship. When I began at Herzl Camp earlier this year, I was grateful for Drea’s warm welcome and her generous introduction to the Herzl family. This summer, as we worked alongside one another, I was fortunate to learn about Herzl’s traditions from Drea–she was very patient with my many questions! I was especially privileged to be able to witness firsthand what you all know: Drea is a deeply caring person and leader–someone with an inspiring dedication to Herzl Camp, our timeless mission, and the individuals who comprise our remarkable community.

Drea’s impact is felt in so many aspects of Machaneh Herzl. I saw this summer how Drea was viewed with respect and even awe when she introduced herself at the beginning of each session as having been at Herzl for 27 years. A role model to many, Drea is sought out by various campers and staff at the flag circle each Shabbat for a hug and their weekly “Drea photo.” Indeed, Drea can’t walk through camp on a typical day without campers stopping her to share their successes, ask her a question, and—new this year—interact with her adorable son Reuby. As Drea now turns to new professional pursuits, she leaves quite a legacy here. To share one example of many: after Caravan and before Kabbalat Shabbat services each Friday, the counselors gather their campers—“their kids”—and recite the blessing over the children. This tradition that Drea brought to Herzl Camp exemplifies the skilled educator and loving person she is.

With wholehearted commitment, Drea Lear has been blessing our community’s children for years. Now, as she blesses her own family and begins writing her life’s next chapter, we thank Drea for all she’s done and celebrate our lifelong connection to her as a Herzl Camp alum and friend.

Drea will remain with us in her current role through the end of September. Thanks to Drea’s prioritization of a smooth transition, we are set up for success. In the coming weeks, we as an organization will begin taking our next steps to recruit new top talent–more on that to come. As always, please feel free to be in touch at josh@herzlcamp.org if you have any questions. Now, I hope you’ll join me in thanking Drea and wishing her, David, Reuby, and her family all the very best.

When Drea and I first discussed her decision to step down, my reaction was that of true appreciation and gratitude. Drea has given so much to camp, to our entire organization, as she now completes the arc of a 27-year camp career.

Having been part of Herzl’s staff for several summers back in college, and now after being part of the board, I can vouch for one thing clearly – the job of running camp is as challenging as it is fulfilling. The months of planning, organizing, and training begin in the fall and into the spring. Then comes summer, a 24/7 endeavor, leading a large staff as they work tirelessly to create the Herzl magic we all know and love. Drea has led us through many successful summers, guiding hundreds of staff members and thousands of campers, and leaving a lasting legacy at camp.

In the traditions she started, the relationships she cultivated, and the programs she brought forth, Drea helped Herzl to grow and prepare for the challenges facing camps today. She introduced professional staff to coach and assist our college-age staff, and created the path for camp to offer social and emotional support to campers where needed. She also focused on deepening our rituals and traditions to maximize camp’s impact on our children. The result of her hard work and dedication is shown in all of the campers and staff who have thrived during her tenure.

Drea has for years been an integral part of Herzl Camp’s commitment to raising the next generation of Jewish leaders. Though I know Drea is committed to helping camp transition successfully to our next chapter, sending her on to her next adventure and welcoming her to the volunteer/alumni side of the Herzl family is certainly bittersweet.

On behalf of the Board of Directors and our community, I want to thank Drea for all she has done for Herzl. We wish her and her family every happiness and success in her next phase of life.